Located at the 2500 block of 11th Street, Lions Park is a half block from Kujenga Pamoja Park. Originally, Lions Park was called the 11th Street Youth Construction Park because it was built with the help of the youth living on 11th Street. The Village construction crew began cleaning up this vacant lot in the mid-1990s. The lot grew in size because the city demolished several houses standing next to the park.

Most of the vacant lots in North Philadelphia once contained homes. When the houses became dilapidated due to abandonment, the city sent workmen to demolish them. The workmen would bury most of the demolished houses into the basements and would pack clay like soil on the surface. When we began converting the lot into a public park, we dug up a huge amount of debris composed of bricks, rocks and broken concrete pieces. It would have cost a lot of energy and money to dispose of these materials properly so we decided to recycle them into a rock garden.

Lions Park needs to be enclosed but also accessible to people. Lily Yeh designed a sculptural wall punctured by two entrances of generous proportion. Although always open, the entryways are guarded by two pairs of majestic lions and a pair of chubby baby lions styled from Chinese folk art. With the help of The Village construction crew, James (Big Man) Maxton shaped the lions so that they look African. Gradually the Park became known as Lions Park.

Originally the three-story high building walls on both sides of the park were plain. The place called for colors and actions. Incorporating designs by children with images from various cultural backgrounds, Lily Yeh created a mural on the north side of the park called “A Ferocious World of Wonders.” The mural was painted by Rachel Schwartzman, Andres Chamorro, Brother Mohammad, Lily Yeh and other volunteers.

At that time, The Village teens produced some strong paper mache sculptures of themselves. Lily Yeh wanted to incorporate these images into the sculptural wall on the west side of the Park. She showed these images to Big Man and the construction crew and asked them to construct figures into the wall with this kind of power and simplicity. The end result is a series of delightful and jubilant cement sculptures. Big Man mosaicked these statues with the help of the construction crew. The end result looks very much like us, the villagers, funky and full of joy.

In the late 1990s, The Village received enormous help from dedicated Americorps and City Year members, who took residency for weeks at The Village to help our community building effort. With their support, The Village was able to organize neighborhood residents, particularly youth living on the block, to begin the construction of the park.

In 2003, with the help of volunteers from various groups, we constructed a labyrinth in the park. It was very beautiful at the beginning but we could not stabilize the stones in the grass and the labyrinth often looked disfigured and chaotic. Eventually we removed the stones and returned the ground to grass. 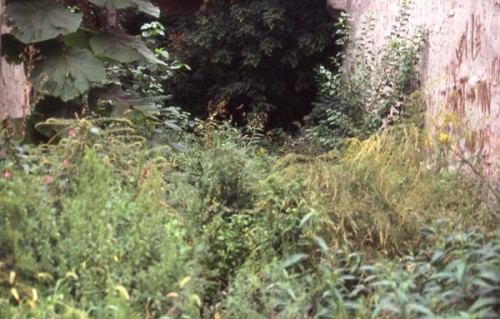 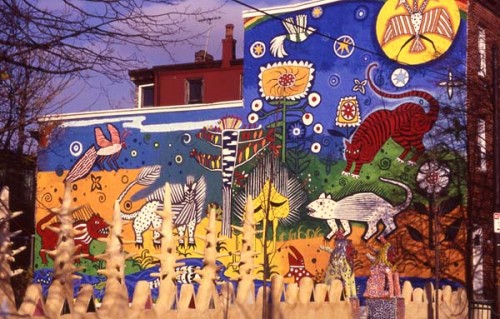