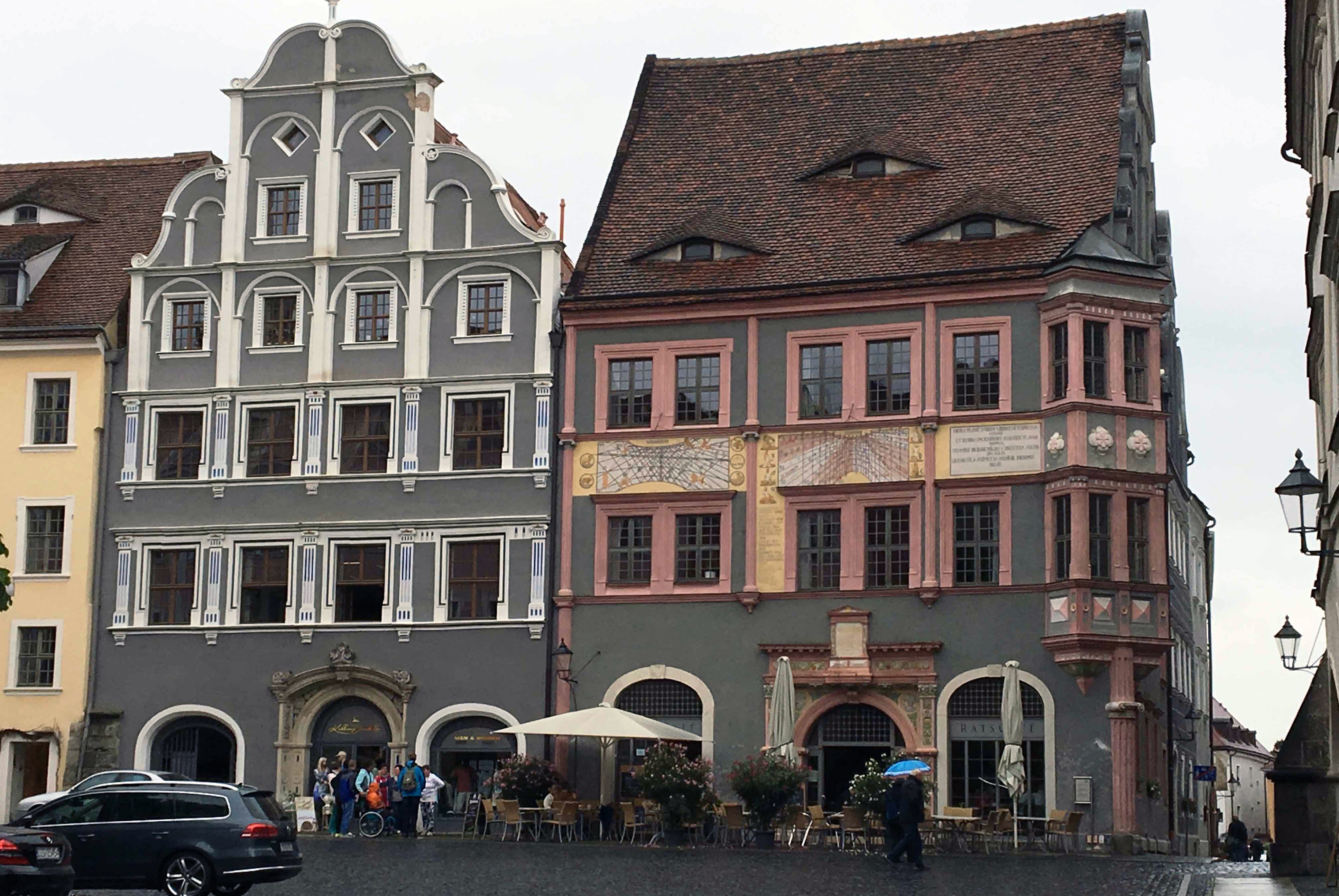 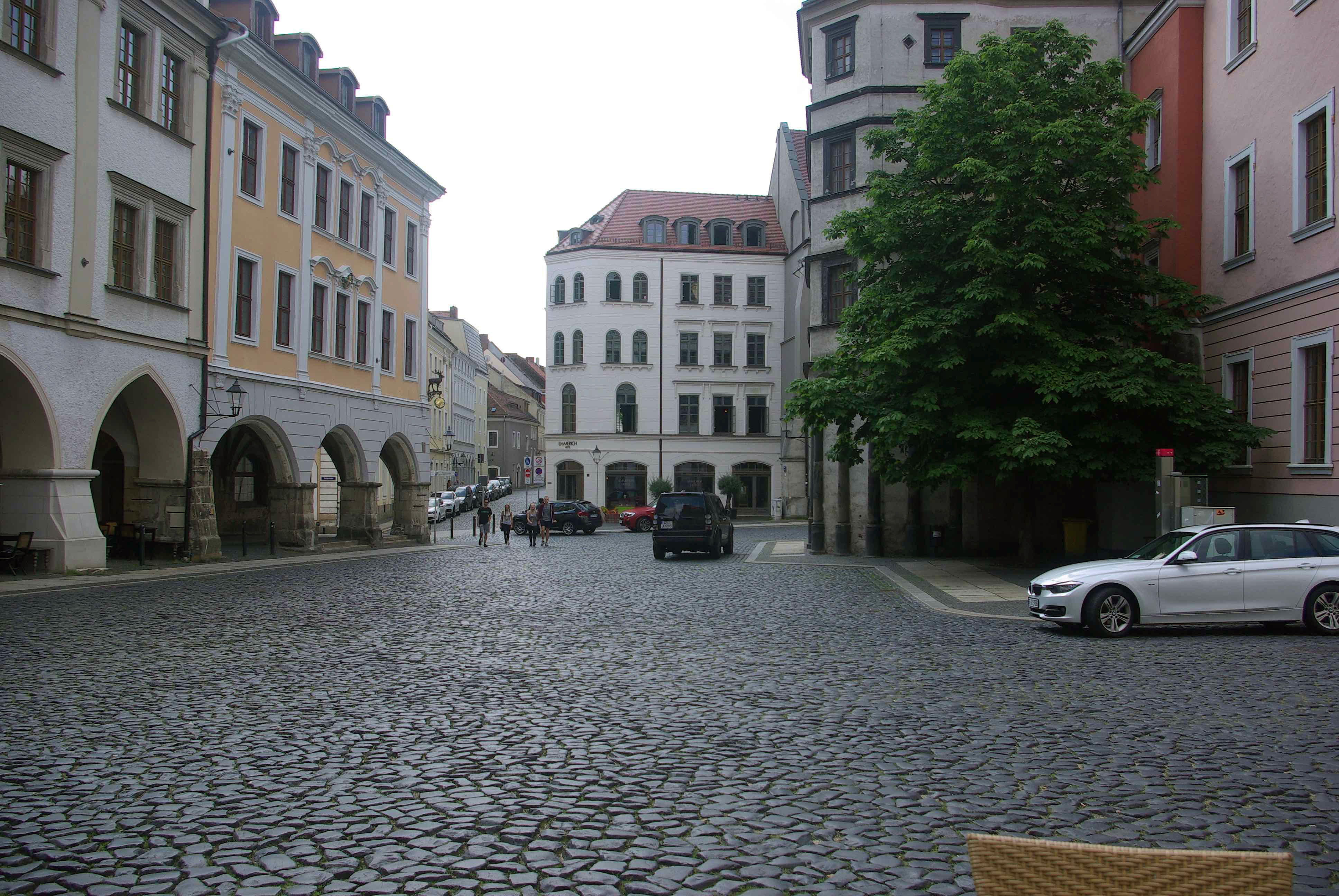 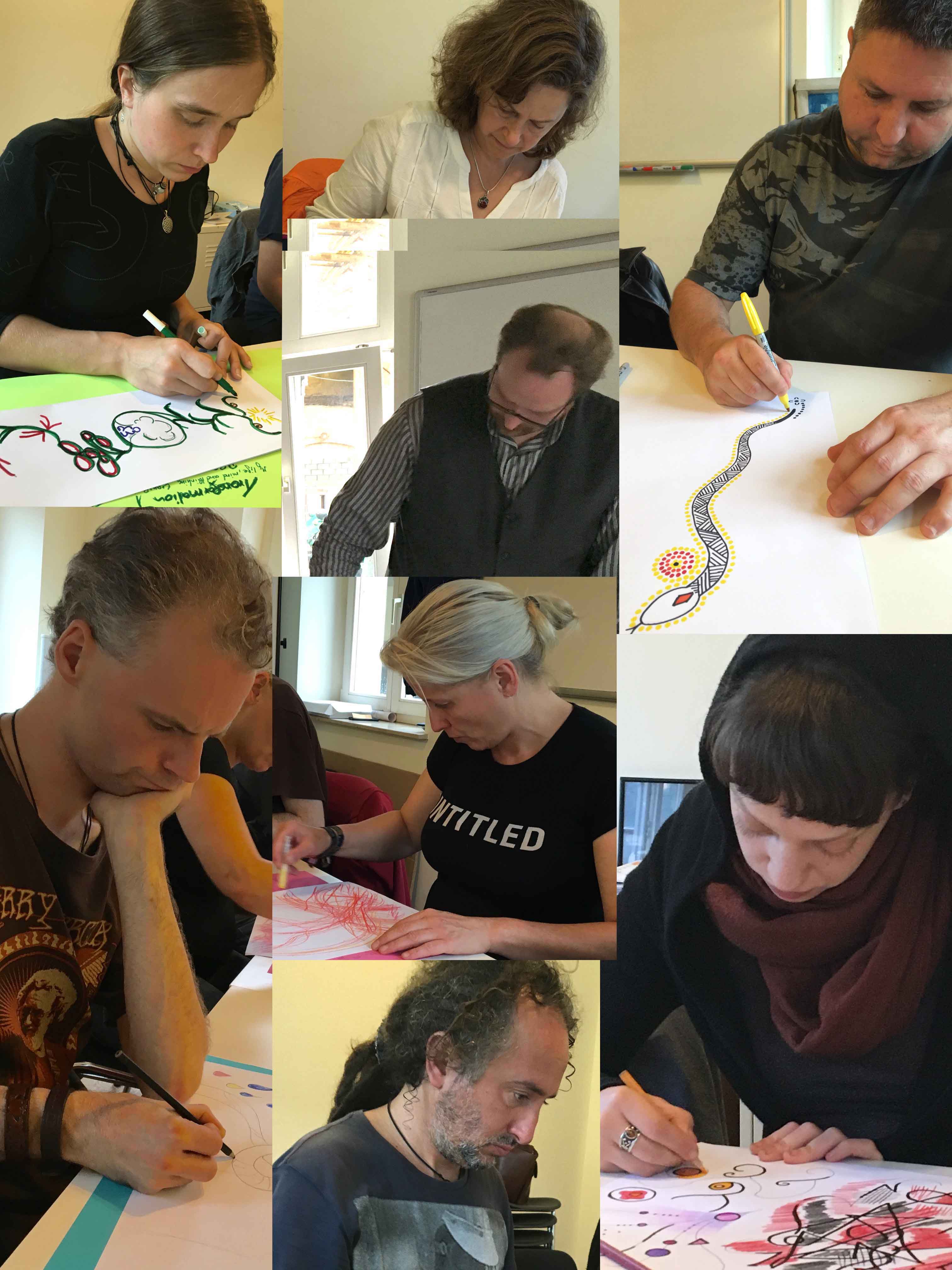 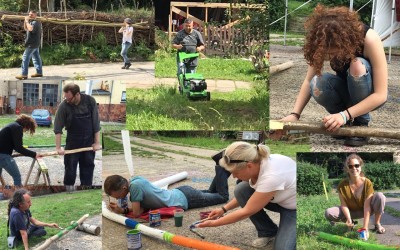 A colleague noted that the Barefoot Artists generally create projects only in places of extreme poverty, even though there is 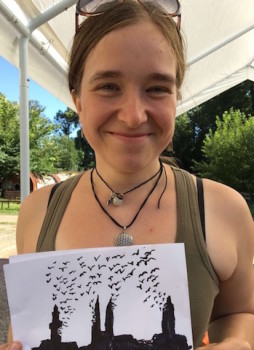 suffering and brokenness in comparatively rich communities.  Germany is one of the wealthiest countries in the world and Gorlitz is a beautiful, medieval town with a historical city intact, yet there is wounding here that runs deep.  Perhaps that is why artists from all over the world are drawn to Gorlitz, awakened by the unformed potential that lies within darkness, the vitality and hope that is held within the rubble and decay.  The question that arises seems to be, “how do we respond to the unfolding of the individual soul as it wants to reconnect to the soul of Gorlitz?”

Anja, a local artist, expresses it this way: “Gorlitz has a big soul.  This soul touches your own soul, every time, every movement, it sees your heart.  So many people here are depressed and not in touch with their own souls; we don’t learn to touch our soul.  We fight against our soul which causes us to become deficit.  If we can see our soul, we can blossom and fall in-love with ourselves and find peace.  That is what Gorlitz tells me.” 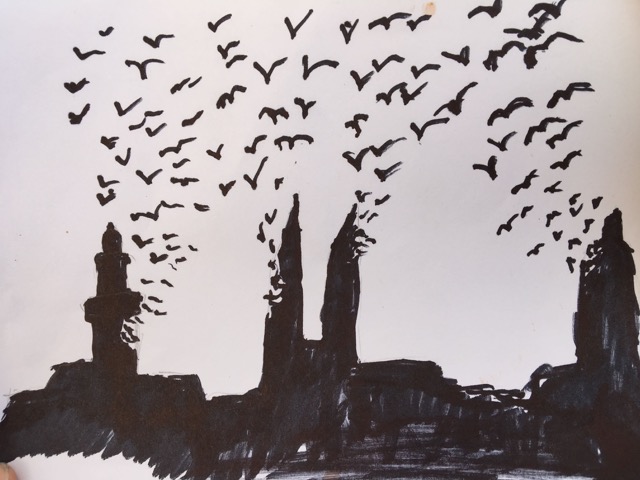 The Barefoot Artists team is sharing the methodology in creating story poles with people.  In this process we first set up a nurturing environment for participants’ personal stories to emerge.  We aim that the stories unfold in simple narratives which then find expression in visual images.  Based on the individual expressions, the team members work together to find a common language that encompasses our emotions and inspirations. This common language provides a foundation for a public art installation, which is rooted in both personal experiences as well as collective memories of Gorlitz.

The project in Gorlitz is taking place at an old factory site that now houses an NGO as well as studios for various tradesmen.  Numerous brick buildings are in various stages of decay. Tomato plants are thriving in a garden designed by youth groups and built on a large mound of rubble.  Bohemian Crossings will host a summer camp this week where school children will create story poles to add to the team’s poles.  We aspire that through working together, we can create a beauty that transforms this site and generates a rippling affect in bringing hope and joy to Gorlitz. 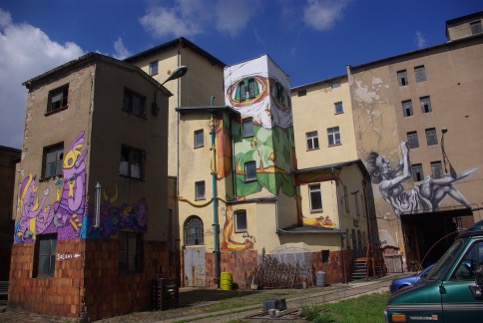 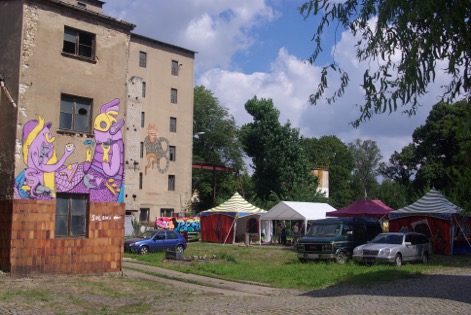 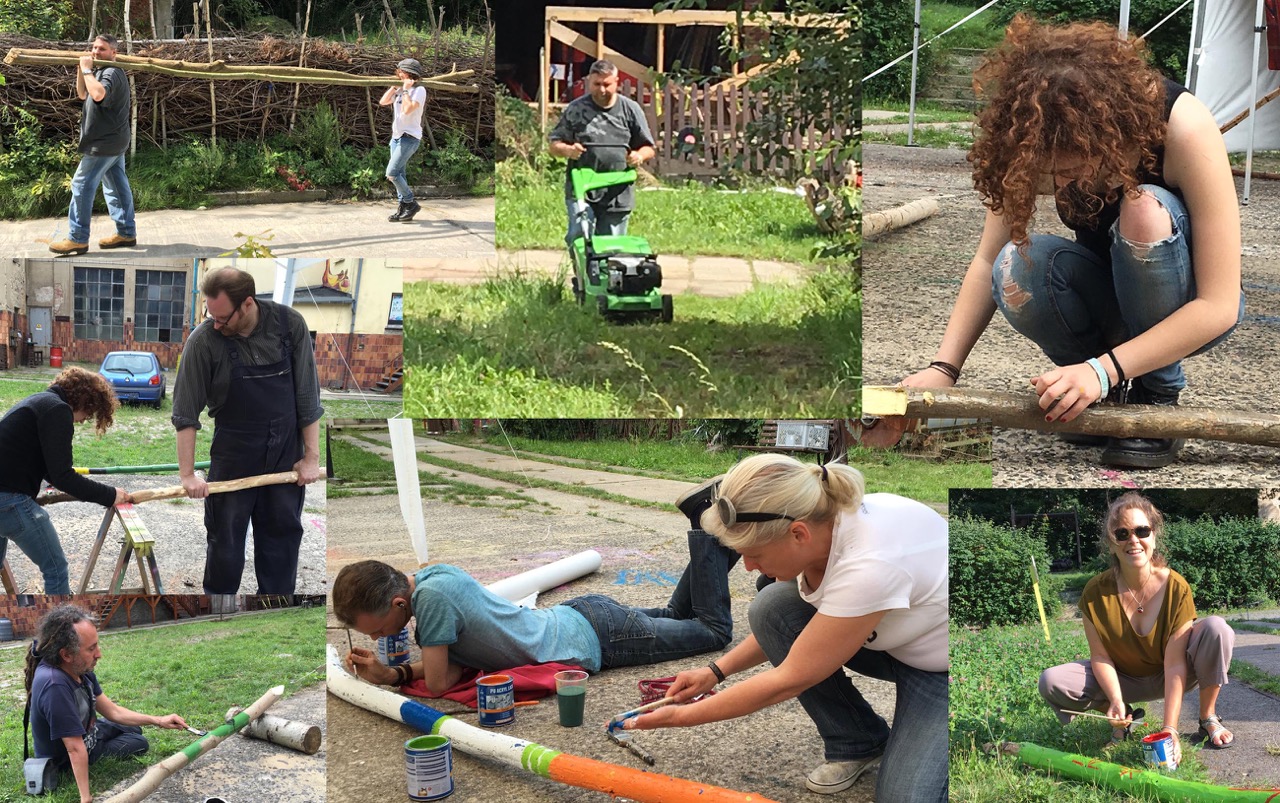 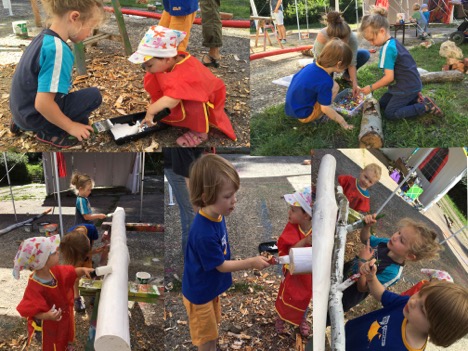 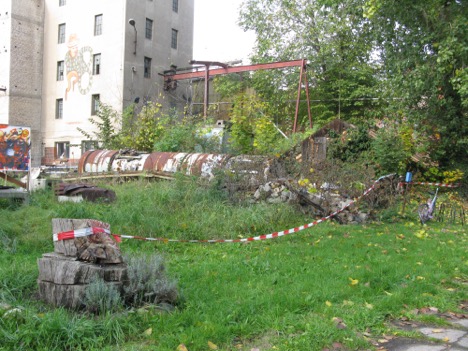 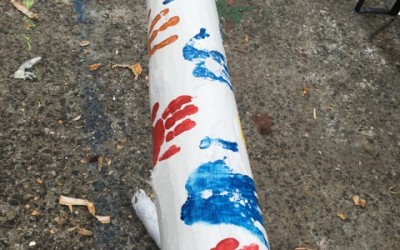 Danielle Hoefler, an artist and advocate, came to Gorlitz six years ago and is the main organizing force behind Bohemian 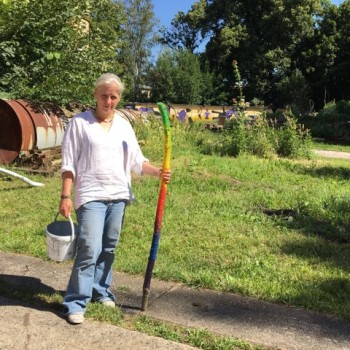 Crossings.  She is a strong, passionate and compassionate presence who believes that the depression weighing down some in the community is rooted in a lack of hope.  She shares, “the inhabitants who were born in Gorlitz don’t necessarily see the beauty that exists here.” The city is largely comprised of an aging population, many of whom spent large portions of their lives living under communist-rule and even before that, for some, the Nazi regime.  “Then one day,” she continues, “completely out of the blue the wall comes down and their lives were entirely different, changed overnight.  They suddenly found themselves in a world they just didn’t know and understand.  Everything was lost.”

With the fall of the wall came a mass exodus of 1/3 of Gorlitz’s population, the closure of most all the factories and major regional industries.  For a time, the area became almost lawless and developed into a large center for the drug market and home to Russian and Polish mafias.  Today alcoholism, drug addiction and poverty continue to feed the despair.

As more of our days unfold here in Gorlitz, it becomes easier to sense the melancholy; there is a feeling of reticence on the streets.  We begin to see beyond the initial delight of relatively quiet and peaceful streets, wondering instead what loneliness and emptiness this might convey.  A large part of the vision of Bohemian Crossings is to create a safe and free space for people to express themselves, not in isolation but in community.  Yet the challenges inherent to building community can quickly and easily disperse energy and positive intention.  Many of us know the frustration expressed in the phrase “herding cats.”  In Germany, as we learned within just a few days of our arrival, the phrase is “herding a bag of fleas.” 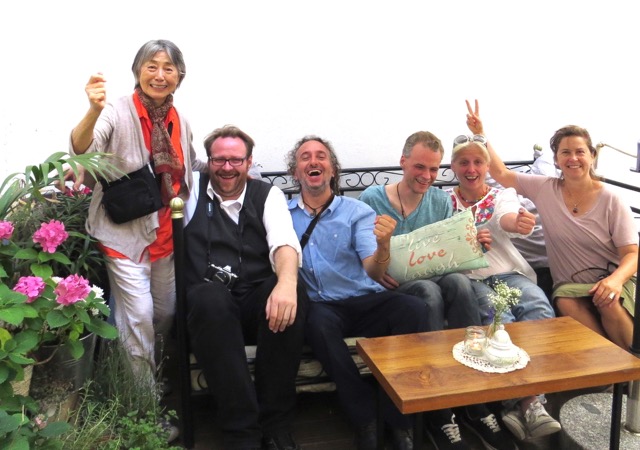 In community-building it is often important to give people open and free space for expression; certainly here there seems to be a strong need for feelings and experiences to be given shape and form.  To succeed in working together, we need to listen to each other’s stories; but we also need to elevate these to another level, channeling the energy, moods and voices into a harmonious chorus.  Choreographing the cats or fleas, as it were, somehow creating a cohesive art piece, for instance, that represents the collective vision.  With the poles we try to find a rhythm, simplicity and repetitive pattern that can serve this purpose – a common language in color, shapes and lines which express diverse emotions and experiences. 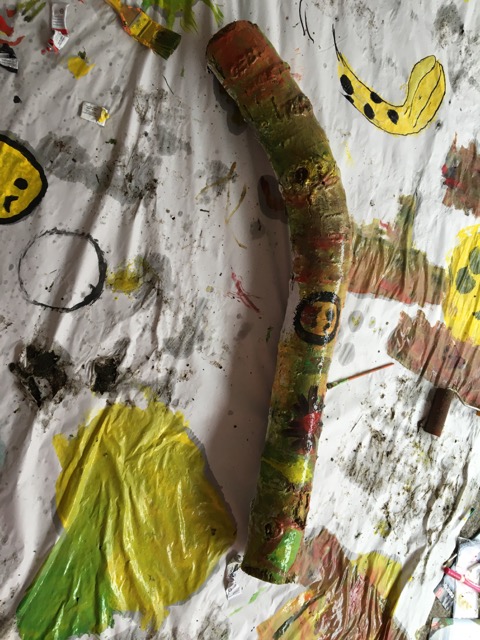 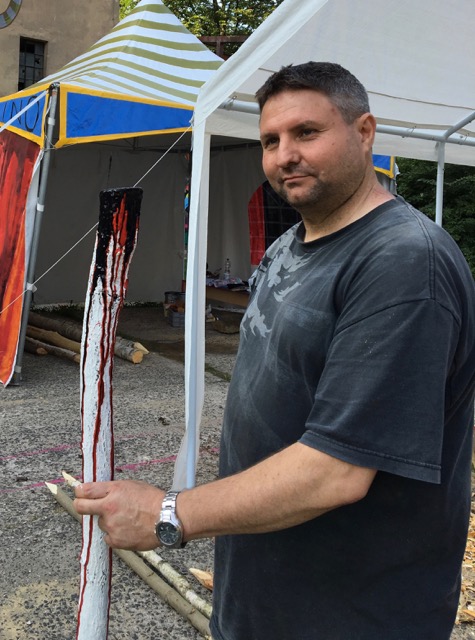 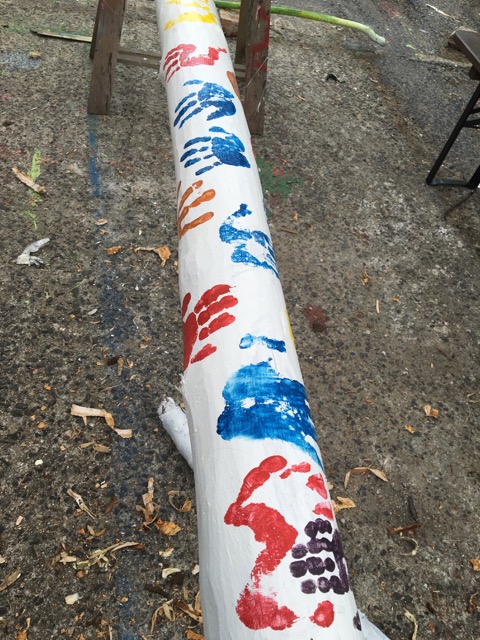 When this doesn’t happen, when the beauty we might have imagined is not achieved, it is easy to feel disappointment.  Certainly this has been the experience of Barefoot Artists in many of our efforts.  We understand that there are powerful art forms that are provocative and confrontational to existing systems, relying often on strong, individualistic voices.  The goal of Barefoot Artists, however, is to create a cohesive expression that includes the individual voices of all participants.

The intention of Bohemian Crossings is to provide and open space in which every person, through arts and creativity, can discover the potential and the beauty within.  It is their hope that the energy and joy created through the process can help transform the mood and inertia of the city. Working with this group of talented, courageous and open individuals is providing us with an amazing opportunity to explore the potent dance between the individual and the collective.  It is a chance to ask more questions, understand the process better and learn together how to take the next step. 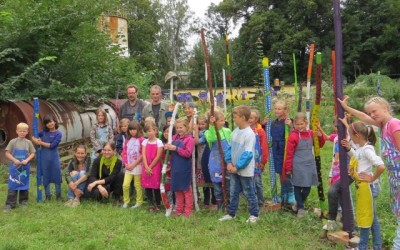 This week, Bohemian Crossings summer camp has welcomed youth groups to the site to create story poles.  We have been delighted to meet little ones from a day care, a group from the refugee community, elementary classes from a public school as well as secondary-age youth from the local Waldorf school.  Poles are decorated with paint, buttons or are carved.  The younger ones practice first on a large roll of paper before working together to paint a large pole with hand prints and dripping paints.  The older youth scatter immediately into groups of two or three with drills and carving tools in hand.  Adults from the community occasionally stop by and create their own design and pole.  The energy is spontaneous, feels welcoming and diverse.

The Bohemian Crossings team themselves are a diverse group of artists who bring talent for poetry, storytelling, music and the visual arts to the gathering.  After the children wash up from all the stray paint that never made it to the pole, they gather around team members who play the guitar, banjo and 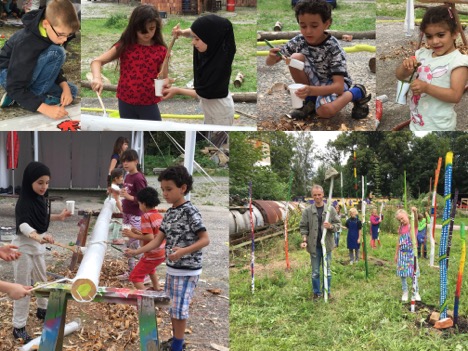 harmonica, singing folk songs from America, Ireland and Germany. They smile, clap and join in with the singing.

The inability to control the result of such unfolding of enthusiasm and energy was at first unsettling, at least requiring in us a shift from our original vision of a sort of unified, cohesive outcome.  Yet what is arising feels potent.  Within the team, there seems to be a blending of the diverse personalities and, at times, competing energies; a sense of order is forming out of what felt initially to be a chaotic, empty space; we feel our connection deepening with the shared desire to create beauty.

The cohesion, however, doesn’t come just from our efforts; instead, it seems to take shape through the youth.  The harmony, the common language we adults have been talking (sometimes arguing) about for the past days is here. What is the common language?  It probably won’t be obviously visible in a public art piece.  Our poles will form a random forest of color and shapes that can, we hope, at least be a physical seed of hope to inspire the unfolding of similar efforts over the years.  No. The common language, the harmonious note is this:  joy – a light that so gracefully absorbs the grey. 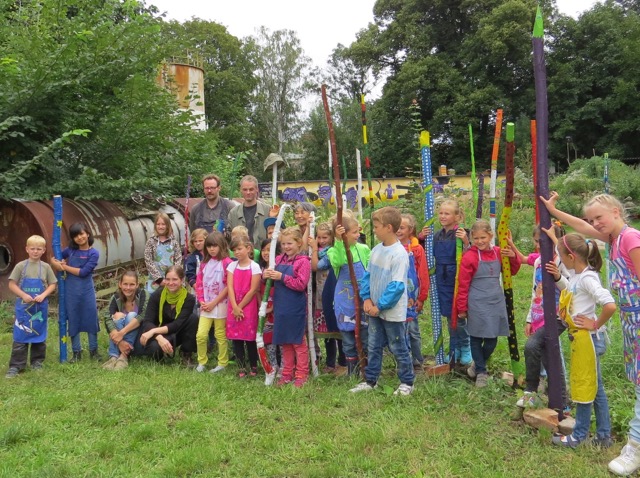 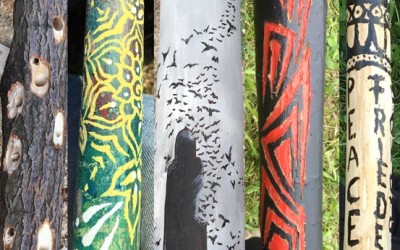 We are at the end of our stay in Gorlitz and are inspired knowing that the artists here will take this experience and encourage it to grow and blossom as it will.  Lily felt this on our first workshop day, noting that “the artists here see the beauty and want to awaken the soul.  We come together to journey collectively to touch our souls.  Through art we are called to make the way free.”

From the Barefoot Artists perspective, the success of this particular effort was not necessarily in a concrete result but in the process; that there was an engagement, enthusiasm and imagining that seemed not to have an inclusive and safe space to unfold before this camp.  Our part in this was minor, serving only as a catalyst through the sharing of a particular methodology.  What emerged through the Bohemian Crossings’ direction is uniquely theirs, perfectly timely for this moment and space.

Below is a video of the Smoke Ceremony conducted by Tony Harwood of Australia. 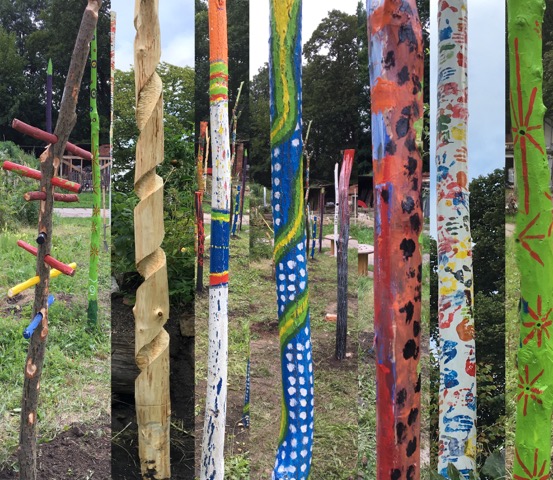 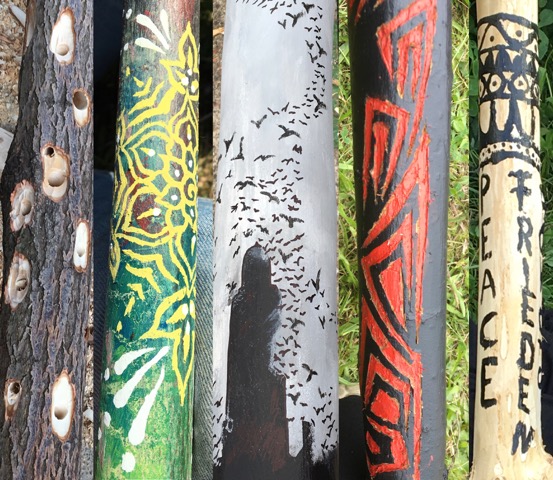 Gorlitz is a rich place, these are rich people – not necessarily in resources and money, but in depth of experience, in pain and suffering, in resiliency, in hope.  An essay by Michael Meade eloquently speaks to many questions that have arisen and the conversations we have had while in Gorlitz, touched by individual stories, historic community trauma and the global crisis that binds us all.  He says, “the counterbalance to collective forms of terror and tragic acts of inhumanity must be found first of all in the awakening of the individual soul to the underlying wholeness and inherent meaning of life.  We must find a greater sense of self or become more isolated, divided and subject to increasing anxieties and feelings of helplessness.  In the great drama of life the awakened human soul becomes the extra quantity and uniquely living quality needed to help tip the balance of the world away from destruction and towards ongoing creation.”

We continue to find our way, at least take steps, on the journey of awakening.  As one of the team members shared during our final reflections, “On the first day I was sad.  Now I am exhausted, but happy. So happy that I want to scream!”

Poems emerged out of our workshop exercises and were shared in the evenings as we sat around the dinner table, so perhaps it is fitting to end with one as well.  These words by Federico Garcia Lorca captures what Barefoot Artists believes and what we have felt here, what has been offered us in vulnerability and open-heartedness.  Thank you Bohemian Crossings and Gorlitz.

The poem
the song,
the picture,
are only water
drawn from the
well of the people
and it must be given back to them
in a cup of beauty,
that they may drink
and in drinking,
understand themselves. 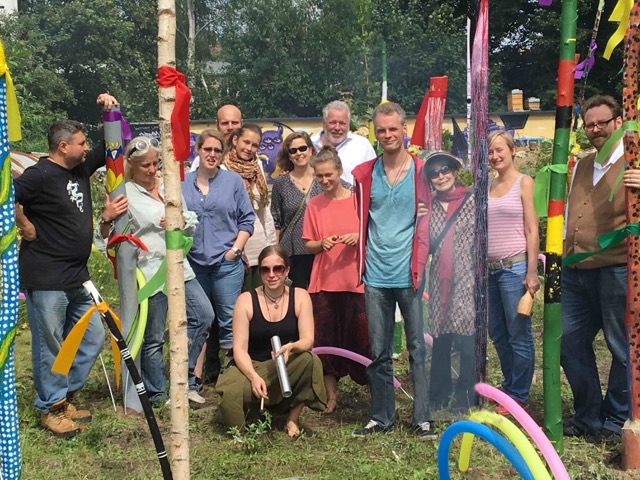